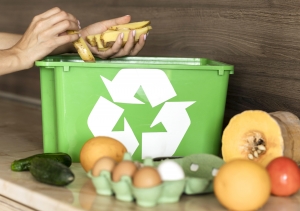 AVELING Café has been taking part in the City of Cockburn’s commercial food waste trial aiming to determine sustainability and environmental benefits for a potential future environmental service.

Our contribution has helped to divert over 15 tonnes of food waste from landfill. This means more than 28,000 kg of greenhouse gas emissions have been captured to generate electricity, rather than being released into the atmosphere and harming the environment.

The trial is a partnership between the City of Cockburn and Richgro, and has been made possible with an $18,257 State Government Community and Industry Engagement grant. The food waste is being delivered for processing in Richgro’s anaerobic digestion plant in Jandakot to help produce high-quality biofertiliser and electricity (via methane capture) to go back into the electricity grid.

Jayson Aveling, Director of Operations at AVELING, says ‘We are always looking for ways to reduce waste and help the environment, so we were very happy to take part in this exciting new project by Cockburn City Council. We are proud to have contributed to reducing a significant amount of waste going to landfill and look forward to continuing to participate in the pilot trial.‘

The trial was originally planned to end in November, however it will now continue until early 2021.

The City of Cockburn are looking for more participants to take part in the trial. Find out more and apply on the Cockburn City website.

View all our events